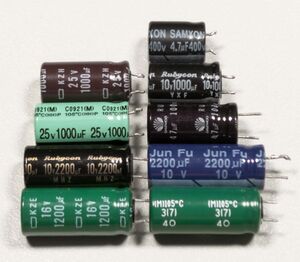 When it comes time to order replacement capacitors you will be trying to match the values as close as possible. One of the best ways to do this is to actually look for the series of a capacitor. This can be found on bigger parts printed as a 2-5 character code. The series will have set standards for the parts that are in it and if you can find a matching new part for your old one you can feel very confident that it will be suitable. You may have trouble finding an older series though, the standards for parts have changed over time and they may have been retired. There are some documents from different manufacturers out there that can tell you what recommended substitute series are available. This would also be a viable solution for finding an extremely similar part.

If you can't find a series listing on a capacitor you are going to have to make some judgement calls on how you want to spec parts. Capacitors are used in many different ways so understanding what they are doing in the device you are repairing can help a lot.

The tolerance or +-% rating of a capacitor is part of the "binning" process when capacitors are made. These aren't always made in high precision methods and the actual values the manufacturers get when they are made can vary. So each capacitor is measured and they are rated for how close they got to the target value. Devices are designed with this variability in mind when choosing parts and you can pay more for a capacitor that have a smaller tolerance range. But tighter tolerance capacitors are not "better" than the larger range examples. They are just slightly more difficult to produce so yields are lower.

Due to the typically wide tolerance rating on consumer product capacitors, it likely won't be too difficult to find new compatible capacitor for most parts as long as it's from the 1970's or newer. Bigger caps may be more difficult but they are less likely to fail on average. There is also a general recommendation that when you are unable to find an exact replacement part, to choose an alternative with a higher capacitance. When choosing a replacement capacitor trying to get as close to the original value as possible is ideal but depending on the use there is some flexibility.

The tolerances of capacitors aren't typically printed on them, but you can make some logical assumptions from what they do, or where they are in the device, to choose a value for a replacement. Here are some examples of uses and what effects the value can have:

Most capacitors in newer devices are used to "smooth" or decouple power. They are just a local, temporary, source of immediate power in case a part draws some quickly. These aren't usually precise and going with a larger or higher tolerance(20%) capacitance won't be an issue. Capacitors used like this are usually near chips with fewer passive parts near them.

Capacitors can be part of a frequency filter, commonly in audio devices, and these will likely need to be more carefully chosen. A different capacitance will result in a different target frequency which can lead to unintended results. For audio this won't be the end of the world but getting as close as you can to the original value would be recommended. Capacitors used like this are usually near passive parts and may be used similarly nearby a few times with different values.

Purely analog circuits can use capacitors for timing and signal generation. These can be critical in some applications like controlling the position of the beam on a CRT. Depending on the device, changing these values too much has a real potential for damage to other parts. These are worth spending a bit more on to get the correct value with a low tolerance just to be sure you won't have issues. Capacitors used like this are usually near lots of passive parts and transistors. There may be a few chips nearby that control them

The voltage rating of a capacitor is a measurement of the dielectric strength separating the two conductive elements of the capacitor. If a voltage above what it is rated for is applied to a capacitor, DC current may flow though shorting the elements causing catastrophic failure. The voltage rating of some capacitors, mostly electrolytic ones, is not constant though, this is actually where reforming can come in to play. As a capacitor sits at a voltage less than what it is rated for, the dielectric layer may break down and become thinner over time. This can happen when a device is off or when it is on and a capacitor is not being used near its rated voltage.

This is important to understand because the conventional wisdom when it comes to replacing capacitors is that it is fine to use higher voltage rated replacements. This is mostly true, there are some factors where it can make differences though. If you use a part with an overrated voltage, as the thickness of the dialectic decreases because of a lower than expected voltage the capacitance will decrease as well. Higher voltage capacitors have a tendency to be larger with greater internal surface area with lower ESR. In some applications with constantly changing signals this can affect the output signal.

Now this doesn't mean you can't use higher voltage rated parts, some manufactures actually recommend overrating capacitors for longevity reasons(which will have been done when the device was designed). But it's not ideal to over do it. If you get new parts that are 2X the originals rated voltage you should be completely fine. But if you get parts that are significantly over rated it's possible they won't be the best choice in the long run.

ESR and ripple current are some of the more mysterious elements of capacitors in the enthusiast space, so I'm going to make some generalizations to have it make some more sense. ESR is the resistance of the actual components inside the capacitor, all conductors have even a small resistance. The ESR can affect how quickly a capacitor can charge and discharge. Also, the higher the ESR is in a capacitor, the more heat it will generate when charged or discharged. Ripple current is current is like a TDP, it is an amount of constant charging and discharging that a capacitor is rated to handle without overheating because of the ESR.

In most applications a lower ESR and thus lower heat output is desirable. There are some examples like voltage regulators that use the ESR as part of a feedback loop and if it's too low it may be unstable. But these are exceptions. Lower ESR is better in almost all cases. Ripple current is more complicated, but generally higher is better. There are no "recommended" values for these that you can use as a baseline for new parts. But the ESR really only makes a huge difference when the capacitor is being constantly charged and discharged. If it's not being used like that, you don't need to worry about it that much and just pick a pick a part that matches your other values. For newer capacitors in circuits where it really matters, you may get lucky and find a series to match to which will have a specific rating so you don't need to pick an ESR yourself.

The temperature rating on capacitors is the operating temp it can run up to. When choosing capacitors this value is given with an expected lifetime of work at that temp. This is a direct indicator of the quality of the capacitor. The higher the operating temperature and the longer the lifetime the longer the capacitor will work. If you are want to spend some more money on capacitors to make them last longer, this is the thing to do it on. But when you are repairing devices that you don't use on a daily basis(a 2000hr capacitor used at max temp 2hrs a day would last almost three years) it may not be worth it because there are other ways the part could fail instead.