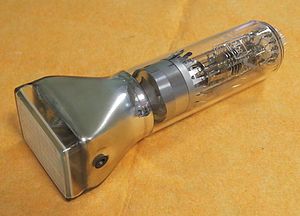 A CRT from an oscilloscope

Cathode Ray Tubes (CRTs) were a very common display type for advanced electronic devices like computers, televisions, oscilloscopes, early calculators, and more and were common to see for about 50 years. As such there are a large number of changes that happened to the over the years that require different techniques for troubleshooting. But there are commonalities between them that can be helpful starting points to begin diagnosing something wrong with one.

CRT stands for "Cathode Ray Tube", where the cathode generates an electron beam that is moved across the phosphor coated tube to produce light. This is somewhat unintuitive with the concept of "conventional current", the idea that current flows from a positive charge to a negative one which is the way most electronics is taught and presented. The reality is that electrons actually flow from a negative charge to a positive one. This fact has been used for multiple types of display technologies like VFDs (Vacuum Florescent Displays) and Nixie tubes which don't use Black-body radiation to create light unlike an incandescent bulb. The electrons hit a phosphor layer in VFDs and flow through a gas in the case of Nixies that they interact with causing the glow. But VFDs and Nixies operate at dozens or a few hundred volts instead of multiple thousands like CRTs. CRTs need the electron flow to be fast and precise, so they use a vacuum like VFDs but increase the voltage difference significantly.

CRTs also have two conductive coatings applied to both the inside and outside. The inside carries the anode voltage and the outside is connected to ground. This was done to use the CRT itself as a capacitor to smooth power fluctuations in the anode voltage. The glass of the tube acts as the dielectric barrier to form the separation. The CRTs capacitance will depend on its size which increases the amount of parallel surface area.

When picking capacitors for the neck board(the PCB connected directly to the back of the tube) it would be beneficial to chose the highest temperature capacitors available. The cathode of the CRT has a heater built in that will radiate out from the tube. This causes additional wear to the capacitors as they are always running above ambient temperatures due to this.

CRTs operate using high voltages to create the electron beam These voltages can be held in the tube itself of a CRT after the device has been turned off. Discharging a CRT will eliminate this charge and make working on the display no more hazardous than any other device that uses Mains Power.