A nickel–cadmium Varta barrel battery that has leaked onto the mainboard of a Korg Poly-61, causing massive corrosion to circuit board traces and legs of integrated circuits.

A battery is a self-contained device that converts chemical chemical energy into a direct current by way of a redox reaction. It consists of one or more cells, the composition of which determines whether the battery is disposable (primary) or rechargeable (secondary). Batteries are typically opposed to mains power as a source of electrical energy, although the two are often used in tandem to power components within a piece of equipment.

In the context of repairing equipment, batteries can be problematic due to their propensity for leaking.

Either when it has been completely consumed or after three to five years from its manufacture (its shelf life),[1] a zinc–carbon battery is prone to leaking. The contents of the leakage may include manganese hydroxide, zinc ammonium chloride, ammonia, zinc chloride, zinc oxide, water and starch. None of these are particularly dangerous to human skin, but this combination of materials is corrosive to metals, such as those of the battery contacts and surrounding circuitry.[2]

After an alkaline battery has been spent, or as it reaches the ends of its shelf life, the chemistry of its cells change, and hydrogen gas is generated as a byproduct. When enough pressure has been built up internally, the casing splits at the bases or side (or both), releasing manganese oxide, zinc oxide, potassium hydroxide, zinc hydroxide, and manganese hydroxide.[2]

Alkaline battery leakage can be effectively neutralized with lemon juice or distilled white vinegar. Eye protection and rubber gloves should be worn, as the potassium hydroxide electrolyte is caustic.[5] 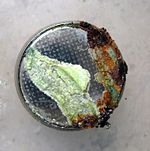 Non-rechargeable lithium batteries have a metallic lithium anode and assorted metallic compounds as cathodes—usually manganese dioxide—with a an electrolyte of lithium salt dissolved in solvent.

A common form of these non-rechargeable lithium batteries are button cells, as used in watches, calculators and motherboard batteries since the mid-1990s.

One of the first personal computers with a built-in lithium battery was the original Macintosh from 1984. Its battery was used for the purposes of preserving the contents of Parameter RAM (PRAM)—Apple's analogue to the BIOS of the IBM PC. The first iterations of the Macintosh stored the battery in a clip-on compartment in the back, allowing it to be replaced by the end user.[6] Later iterations (from the Macintosh II onward) put the battery either in a metal compartment on the surface of the logic board, with a plastic shell to hold it in, or had the battery soldered directly to pads on the logic board, in a form similar to an axial capacitor. Apple used three brands of lithium batteries for this PRAM application from the 1980s to the early 2000s: Tadiran, Varta, and Maxell. The latter Maxell batteries are nicknamed "red bombs" due to their tendency to rupture violently, causing irreparable damage and corrosion to all components and traces in its vicinity.[7][8][9]

Except in aeronautical or other high-risk applications, Ni-Cd batteries are intentionally not hermetically sealed and include pressure vents for safety if the batteries are charged improperly. The seal around the cell(s) is usually plastic heat-shrink tubing; with age and sufficient thermal cycles the seal will degrade and allow electrolyte to leak through.[11] The leakage usually travels down the positive and/or negative terminals onto any surrounding circuitry (see the top image).

Like with alkaline battery leakage, Ni-Cd leakage can be effectively neutralized with lemon juice or distilled white vinegar.

Nickel–metal hydride (Ni-MH) largely replaced Ni-Cd batteries in the early 1990s.[10] They replaced the metallic cadmium electrode with a hydrogen-absorbing alloy, allowing it to have over two times the capacity of Ni-Cd batteries while being easier to recycle. Their heyday in computer equipment was in the early- to mid-1990s. By 1995, most motherboard manufacturers switched to non-rechargable lithium button cells to keep the BIOS chip powered.[12] Lithium-based battery packs replaced Ni-MH packs in all but the lowest-end laptops by the early 2000s.[13]

The practical shelf life of a Ni-MH is roughly five years. Cylindrical jelly-roll Ni-MH cells, like the ones used in 1990s laptop battery packs, discharge at a rate of up to 2% per day, while button cells like the ones used in motherboard batteries discharge at a rate of less than 20% per month.[14] They are said to leak less frequently than alkaline batteries but have a similar failure mode.[15]

Ni-MH leakage can be effectively neutralized with lemon juice or distilled white vinegar.

A lithium-ion battery ... is a type of rechargeable battery in which lithium ions move from the negative electrode through an electrolyte to the positive electrode during discharge and back when charging. Li-ion batteries use an intercalated lithium compound as the material at the positive electrode and typically graphite at the negative electrode.[16]
If overheated or overcharged, Li-ion batteries may suffer thermal runaway and cell rupture. In extreme cases this can lead to leakage, explosion or fire. To reduce these risks, many lithium-ion cells (and battery packs) contain fail-safe circuitry that disconnects the battery when its voltage is outside the safe range of 3–4.2 V per cell ...

Lead acid batteries were the first rechargable battery. Their perfomance is a lot lower compared to modern alternatives such as Ni-MH and Lithium ion. Despite their lower capacity and significant weight, they are able to supply a large amount of current which is why they are still used in stationary applications, and where weight and capacity is not as much of a concern. E.G. ICE Vehicles, Uninteruptible Power Supplies.

A single lead acid cell is nominally 2.1v when charged. A car battery being comprised of 6 of these cells connected in series to form a 12V battery. (12.6v nominally, however when charging you will see up to 14.5v, and when discharged as low as 10v)

They contain Sulphuric Acid, so any contact with skin needs to be washed immediatly, and you should be mindful that they contain lead as well. They are able to be float charged permanatly, for example in a uninteruptible power supply, however after ~5 years of being on charge even sealed versions (SLA, AGM) will have their electrolyte evaporate, this can cause them to swell over time which can cause them to crack and leak.

If left for a couple of years without charging, they will discharge and the plates will become coated in lead sulphate. This is known as "Sulphation" and it will reduce the capacity / usability of it.