The threats of danger from working on CRTs are widely misunderstood and may lead to serviceable CRTs being disposed of when repairs could have been made. This page aims to explain why most hazardous claims are exaggerated and what the few real possible dangers of working on a CRTs are. Most CRTs made only have the potential for the anode to provide a shock, but older displays may have live chassis and some special displays may use electrostatic deflection rather than magnetic. So the older and more niche you go, the more precautions you should take. 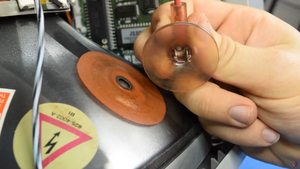 The clips on an anode cap from a Mac Classic II

As explained in CRT Operation the glass tube acts as a capacitor. The amount of energy it can contain when powered off can vary based on the size and construction of the tube but may typically be around 1 to 10 nF in combination with the fly-back output capacitance. This means at 20,000 V the total energy stored in the tube itself would be between 0.2 to 2 J. For perspective an ATX computer power supply may have a 450 V 270 µF Mains Power filter capacitor which can store about 27 J and a defibrillator may deliver 10 to 350 J to a patient. Additionally the very high anode voltage is often greater than the dielectric breakdown voltage of things like plastic handled screwdrivers, pieces of wood or small air gaps meaning they become conductors allowing you to be shocked. So a shock from a CRT is not any more hazardous than other devices, but is more likely to shock when you're not expecting it.

You can only be shocked by the CRT when you touch both its anode and cathode. The cathode is connected to the outside conductive coating of the tube and is typically connected to circuit ground making anywhere on the chassis of the device act as the cathode of the CRT for completing a circuit. The only way to access the anode is under the anode cap though, the inner coating is not externally exposed. The anode cap is also connected to the flyback transformer, but due to the fully encapsulated nature of most modern fly-back transformers you cannot come in contact with the anode directly on it. So if you do not need to remove the anode cap, you are unlikely to come in contact with both sides of the CRT and be shocked. The only time it is likely to happen is when you need to remove the anode cap, which should only be needed when removing the PCB the flyback transformer is mounted to or the CRT itself.

When working on a CRT attention should be paid to the charged state of the display tube. The dangers of being shocked are frequently characterized as being lethal, which is a gross exaggeration. You can be shocked (and the author writing this has) by a CRT and suffer no ill effects other than surprise and embarrassment. The severity will depend on the characteristics of the tube though.

Since the CRT itself functions as a capacitor, the way to discharge it is to connect the anode and cathode to allow for the voltage potential to equalize between them. The energy stored in the tube is dissipated as heat through the connection. The CRT does not need to be connected to earth ground to achieve this. To do this you need to connect the clips of the anode cap while it is still attached to the tube to ground on the chassis. The most difficult part of the process is is getting a conductor underneath the anode cap on the CRT which may be "stuck" if it was applied with a grease. Using a non-conductive tool to first lift the silicone portion of the anode cap can be helpful. A simple way of then connecting the anode to ground is to use a wire with clips to connect the chassis to a flat bladed screw driver and then tap the clips of the anode cap with the screwdriver. You will most likely hear and potentially see a spark when the discharge happens. The discharge is instant as soon as the spark happens.

Some CRTs may have a "bleeder" resistor installed which connects the CRTs anode and cathode. This will be an extremely high value resistor that won't allow much current to pass through, but once a CRT has been turned off it will slowly dissipate the charge. If you attempt to manually discharge and do not hear or see a spark this may be why.

This style of CRT is most commonly found in older monochrome TV sets, oscilloscopes and other test equipment, they can be identified by their lack of a yoke and long tube. Those CRTs like electromagnetic CRTs also use a high acceleration voltage on the anode up to 15 kV typically to form the electron beam, however unlike high current low voltage electromagnetic CRT yokes, electrostatic CRTs instead have several high voltages for deflection and focusing, those are typically between 1.5 kV and 300 V (both positive and negative) and can be a hazard especially in older units with poorly labeled fully exposed circuits boards.

Some CRTs contain metalwork such as the frame or heatsinks that are live with mains voltage (100 to 240 V), touching those will result in a potentially lethal electric shock. When working on those types of CRTs an isolation transformer is essential but does not eliminate the risk of electric shock.

In summary this hazard is only present in very specific older CRTs and some CRTs not intended for use in a home and even then the risk is minimal to repair.

CRTs have the capability to generate small amounts of low energy ionizing radiation (x-rays) when turned on due to the accelerated electrons rapidly decelerating when hitting the front grilles, phosphors and glass, however this is typically an insignificant amount as modern CRTs contain leaded glass that block this radiation, some CRTs from the 1960s emit ionizing radiation "in excess of desirable levels" so should not be viewed from close distances or for long periods. Regardless, when switched off all ionizing radiation production is stopped, no 'residual' radiation remains, there is no risk of this type of ionizing radiation exposure when repairing CRTs.

Some CRTs contain cathodes with thoriated tungsten cathodes, as thorium is a radioactive isotope it emits ionizing radiation (gamma rays) even without power. However due to the very small amount of thorium, it's containment in the glass tube and it's limited use in modern CRTs it poses no risk to repair.